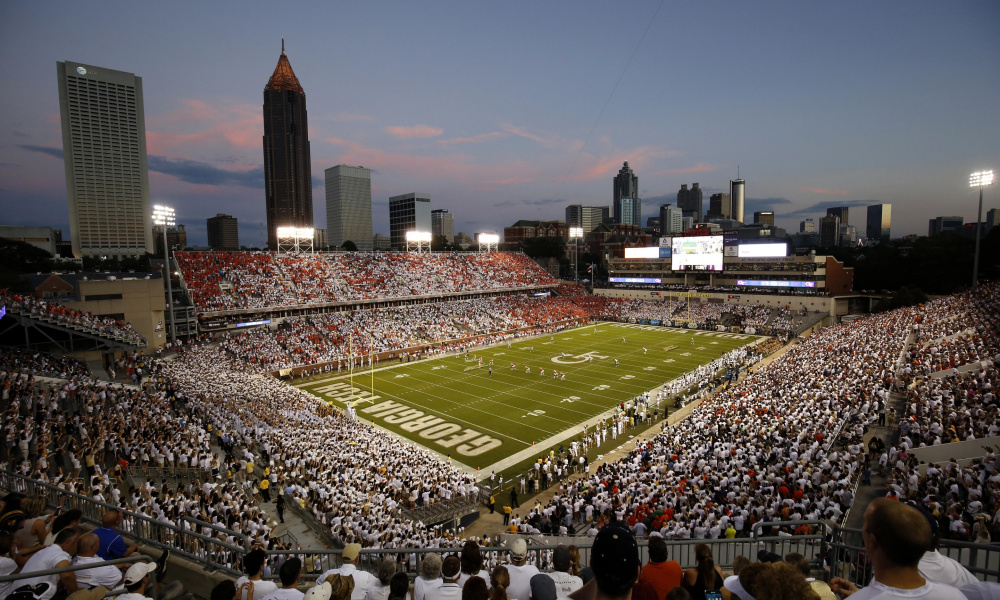 Located at the corner of North Avenue at Techwood Drive on the campus of Georgia Institute of Technology in Atlanta is the Bobby Dodd Stadium at Historic Grant Field. It has been home to the Georgia Tech Yellow Jackets football team, aka “Ramblin’ Wreck”, in rudimentary form since 1905 and as a complete stadium since 1913. The team participates in the NCAA Division I Football Bowl Subdivision as a member of the Atlantic Coast Conference and is the oldest stadium in the FBS. Additionally, it has been the site of more home wins than any other FBS stadium.

The arena of 55,000 seats is located on the east side of the Georgia Tech campus, across from freshman housing facilities. It is just a short walk from the campus library and fraternity/sorority row. The facility is in Midtown Atlanta, which is just off Interstate 75/85 (the “Downtown Connector”) and across from the famed Varsity restaurant. The stadium’s atmosphere is unique in its setting. Patrons are most likely to be able to see a picturesque view of the downtown and Midtown Atlanta skylines looming overhead during games.

Football has been played at the Grant Field site since 1905. In 1913, permanent grandstands were built for the first time. Construction was done mostly by Tech students. It was originally named after Hugh Inman Grant, son of John W. Grant, a well-known Atlanta merchant and original benefactor of the stadium. Six years from its opening, the stadium grew from a capacity of 7,000 to one of 25,000.

In 1988, the stadium was renamed in honor of Bobby Dodd. Coach Dodd has the most wins of any coach in the team’s history. However, the university did not change the name of the surface, the playing surface is still named Grant Field.

The stadium bears little, if any, resemblance to its original form as it has been renovated multiple times throughout the years. The original facility, roughly corresponding to the lower level of the current stadium’s west grandstands, with only 5,600 seats. The terrain in the area slopes upward from north to south. The slope was very noticeable in the background of early photos before they were covered by the large stands built over them. Due to that natural grade, much of the field itself is below street level. In the 1930s, dormitory buildings replaced the houses observable in the background of early photos.

The east and south stands were completed by 1925. This changed the stadium into a 30,000-seat horseshoe with an open north end. The west stands were rebuilt and a large press box was added in 1947 and brought the capacity up to 44,000. The original all-steel 4,105-seat North stands were erected in 1958. In 1962 and 1968 the upper decks were added to the East and West sides, respectively. This installation brought the stadium’s capacity to its all-time high of 58,121.

Grant Field hosted the inaugural Peach Bowl in 1968 and would serve as its venue from 1968 to 1970. In 1985, the South stands were demolished to make room for the William C. Wardlaw Center. The center is a modern field house and athletic office facility to replace the facilities in the old Heisman Gym, which was located just to the north of the stadium. However, the construction of the Wardlaw Center reduced the stadium’s capacity to 46,000.

The current, modern west grandstand covers the old concrete one that is still intact underneath. The high intervening space is currently used for storage. Grant Field was occasionally used as a site baseball park previously. The Atlanta Falcons played their games there during the team’s early years when it was sharing Fulton County Stadium with the Atlanta Braves of Major League Baseball and there were scheduling conflicts.

After the 2001 season, a major expansion and renovation project began. The project was split into two phases in order to play the 2002 season in the stadium. The first phase includes the return of the South end seatings in front of the Wardlaw Center, and the original North stands and lower east bleachers were rebuilt and bowled in. Phase two which was after the 2002 season, the expansion was completed by adding a massive free standing upper deck in the north end zone. It was this addition that brought Bobby Dodd Stadium to its current capacity. The new stadium was rededicated during the 2003 home season opener. It was a game where the Ramblin’ Wreck played against the Auburn Tigers on September 2, 2003.

Later, in the summer of 2009, Bobby Dodd Stadium underwent a number of changes again. First, the scoreboard was renovated. It is now twice as big as the old scoreboard. Also, ribbon boards were installed in front of the Wardlaw Center, as well as along the sides of the stadium. Another change was the improvement of the sound system in the stadium, which was long overdue.

On October 5, 2016, Major League Soccer expansion team Atlanta United FC announced that it would play its home matches for the first half of the 2017 MLS season at Bobby Dodd Stadium. It was because Atlanta United FC was waiting for the new Mercedes-Benz Stadium to be ready in mid-2017. In total, the soccer club paid the university and the athletic association over $1 million for the usage of Bobby Dodd Stadium.

Georgia Tech Yellow Jackets Fight Song:
Listen to the song and read the lyrics to the chant.

Ticket Policies:
Find out more about our ticket guarantee and other ticket policies.